Ongoing restoration of the historic trails in the Northern Cascades

Barely visible is the Dewdney Trail that winds its way along Snass Creek in the Cascade Recreation Area of Manning Park. This historic route requires major brushing and windfall removal that will be done by a variety of groups throughout the summer and fall of 2012. There is over 50 kilometers of the original trail remaining today thanks to the past efforts of OSPS. The western trailhead is at the Cascade parking area off of Highway # 3 in Manning Park and the eastern trailhead is at Forty-seven Mile Creek on the Whipsaw Forest Service Road close to Princeton, B.C.

Three volunteers from the Hope Mountain Centre descend on the Hudson’s Bay Brigade Trail that passes by the scenic Palmer’s Pond. Hope Mountain Centre and the Back Country Horsemen of BC have been instrumental in the restoration of the trail which this year will include the construction of three backcountry campsites along the 53 kilometer route. Check out “trails” on www.hopemountain.org for more details.

The group calling themselves the “Hopeful Hikers” set out on the west side of the Cascades in 2008 searching for the remains of the Hudson’s Bay Brigade Trail heading east over the Cascade Mountains. The 10 hikers were successful in locating the trail from Peers Creek west to the Cascade Divide on Mount Davis. Some sections were very difficult to follow as there had not been maintained more than 15 years. 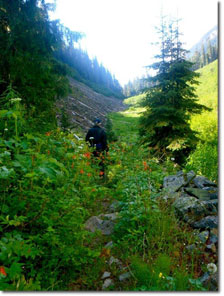 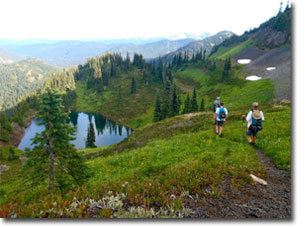 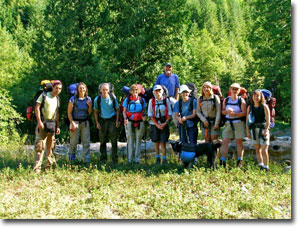